House hunting in North Georgia isn’t like it is in New England. In the North, homes are built on a foundation that have been dug tight into the dirt. In the mountains of Georgia they perch off the hillsides and hold on with six by six’s that look like they will snap at any time. If you are looking for a thrill then house hunting in these mountains will get you there. We toured homes where I couldn’t stand out on the deck for fear of falling straight down into an abyss of red rocks, pine and bramble. We toured homes where I closed my eyes while going down their driveways and wondered how Barb, our agent, would ever back out. And we toured homes where the muddy access roads twisted and turned so steeply up to the ridge that my stomach turned over imaging us slip…slip…slipping over the edge. It didn’t faze Barb though, she just gave me curious looks. “You’ll get used to it.” She lives at the very tippy top of the highest ridge in the area. She got used to it. That doesn’t mean that I will.

Needless to say, the scariest time would have been if we tried to purchase a house in Northern Georgia without a very good agent. We signed a purchase and sale and gave notice to the owners of the cabin we were renting. We couldn’t have imagined what would come next.

The house we contracted for was a compromise between Bill and myself. He had to have a great view. I had to have a great kitchen and rooms large enough for living. I didn’t want lots of rooms. Just big rooms with high ceiling and made with quality materials. This house gave Bill his view, and I got to work designing my new kitchen and baths. 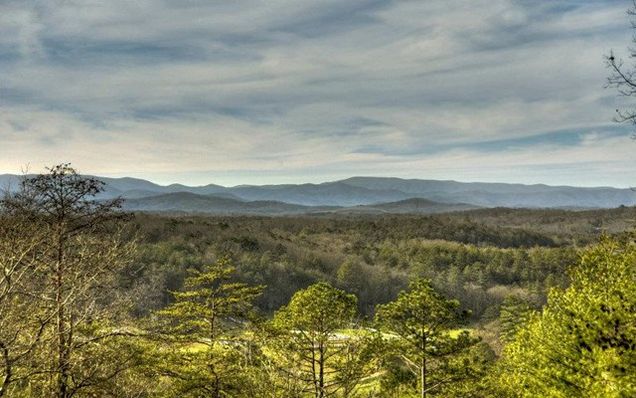 Then two weeks out from the closing, lots of questions still remained. Our inquiries had been ignored by the listing agent and/or the owners. What was going on?

Our soon to be new home was suppose to be part of a large subdivision, and we wondered why the road had never been paved or maintained. The rest of the sub-division, on the other side of the hill, was paved and well kept. We asked the listing broker and got nothing back.

In New England water comes from a well or the town. That is the same as it is here but when we asked which is was, we didn’t get an answer.

We had asked to have the septic pumped and inquired about the septic’s size, but we didn’t get a reply to that either. This is all basic house maintenance stuff. The answers should flow easily and uncomplicated like a stream of clear water. So why doesn’t the homeowner get back to us?

A survey with property lines marked was required in our contract but none had been scheduled. hmmm!

So now Barb dug in and so did I.

Barb contacted the HOA and was told that the houses on our side of the hill decided not to pay the money to maintain the road and also our homeowner wasn’t a member to boot. They didn’t pay the yearly $200 fee.

I drove by the house and noticed a man in a neighbor’s driveway. I stopped and introduce myself. I inquired about the water’s source, and he replied that the houses are on a community well and not the town as the rest of the development is.  He warned that most of the homes in the area are weekly rentals, with vacationers filling every bed. Renters from the city aren’t sensitive to well owner’s needs. The water for the hot tubs need to be changed every rental.  He adds that the water is often yellow and sometimes the well is dry. When we go back to our homeowner, he finally replies that the last bill he received was over a year back and he didn’t know who he paid. Hmmm.

Barb kept following up with the listing agent to have the other item checked. She told us we couldn’t pass papers until these are completed. This is North Georgia and she knows what can happen if all the T s aren’t crossed. A week before closing she practically has to schedule the surveyor and septic inspector herself. By this time, we aren’t sure if this is a bad listing agent or the owner is remiss. HMmm

When the inspector arrives, no one can tell him where the septic is located. He has to dig up a good portion of the yard. The septic is six feet down, deep enough to be a coffin, and it has no extension to the surface. He’s a nice guy,  he pumps it and covers it back up as neatly as a backhoe can do. When we ask him how big the system is. He replies that it is for a two bedroom house. This house is a four bedroom house. HMMM. Two strikes against us now. Barb explained that the Building Inspectors are much tougher than ten years ago. This wouldn’t pass mustard under current rules. How long would it be before the town came after us for an upgrade to the system? If we remodel the kitchen and baths will the town require a new septic also?

Well, we can deal with all of this so far. We can dig our own well and if necessary a new septic. Lots more money but Bill likes the view.

The house is built on one and a quarter acres and Bill plans to use all of the land for gardens. He’s anxious to walk the property lines as soon as the surveyors complete their markings. The survey starts out with a small issue right away. The gas fireplace of the screen porch is almost on the property line. My plans were to inclose that area and make it into a den. This could create a problem down the line. A sharp building inspector would catch that issue. He would want a set back from the property line of like ten feet or so. Then, on the other side of the house, the neighbor’s deck crosses the line onto our proposed property by a foot. No ten foot set backs there. We could deal with this, but as they continue marking the lines down the hill, the surveyors stopped. They can’t go any further. There is a house in the way. A whole other house is on our one and a quarter acres. The plot of land, a hundred feet off our deck,  with undisturbed woods that we had thought would be ours, belongs to someone else. Our land was more to the right, just under that house in the woods This was all such a mess. And worse yet, it turns out that the intruding house is owned and was built by the same owner as the house we are trying to buy. This isn’t right. It’s a problem for us. A big problem.

But, not for the homeowner. He doesn’t consider it a problem at all. He’ll just redraw the property lines and change the paperwork. What!!! You want to take land from us with no compensation. Are you nuts! And where will Bill’s gardens go, on the neighbor’s roof?

One thought on “Don’t pack up the rental cottage. We aren’t moving yet.”