Containers and other temporary structures

Since arriving in St. Martin, we’ve heard the government is reluctant to issue new business licenses. Some business owners try pressing forward by complaining in the newspaper. Some wait six years or more to be legalized, risking everything on running a non-licensed operation. Why a government would want to delay development leaves questions in my mind as to what they are waiting for but I’m a guest, so I won’t go there.

These long delays leave owners anxious to get working; many start in what they think will be temporary structures hoping the officials leave them alone. Some like their temporary digs so much they keep them long after the legal nail biting is over.

Temporary structures can be fun and leave more to the imagination for a budding entrepreneur. 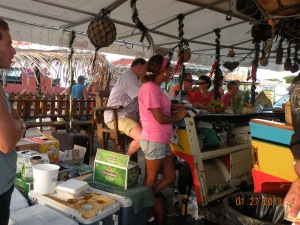 For instance, The Driftwood Boat Bar located between the west end of the airport runway and the Caribbean is always packed. Customers surround the outside of the boat while the girls hustle drinks from the inside.

We’ve been told, but never witnessed firsthand, that they also hustle drinks from on the bar. Yes, if you’re there on the right day, at the right time, boogying booty on the bar top can be seen.

They’ve added picnic tables for more seating overlooking the water and food is cooked in a van next to the bar. Ice is carried in everyday by coolers and a gas

generator helps the cook out.

We sat at the picnic tables with friends one afternoon eating ribs and looking toward the sea. We heard the sound of plane engines and suddenly, the waitress ran around yelling, “Hold onto everything, hold on to your food, hold onto your drink.” Thank goodness, we did as we were told. 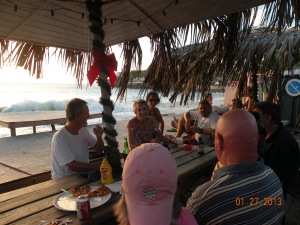 We were at the beginning of the runway, seated not two hundred feet away from a 747 taking off and we were seated in the jet’s exhaust path. The force was so strong everything not held down shot across the beach as though from a canon into the sea and then sailed unto Puerto Rico.

Our very favorite beach bar, Karacters, started out with as temporary structure-and old school bus pulled up on the beach. Holes were cut in the side with pop up shutters added to close at night and a ledge of wood along the outside with bar stools for guests. The bus’s interior is the working part of the bar. They’ve now grown with a temporary roof over tables instead of umbrellas. A feature we are eternally grateful for this. During our first visit there, it poured just after we received our meal. We loved the food so much that not even watered down wasabi running on my plate could have made the tuna sashimi taste bad. We’ve been hooked ever since.

Freight containers are a popular way to begin. A business can build a kitchen in a container for a restaurant, a bathroom works well in a container, tile it and install fancy fixtures. 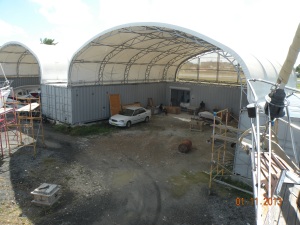 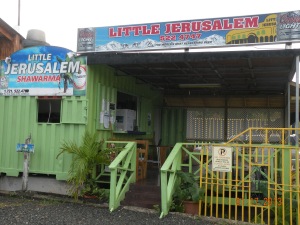 Here in the boatyard they build workshops by stacking containers two high, forming a U, and then making workspace out of the open space between them by putting a temporary roof over the enclosed courtyard. Add stairs going to the second level and presto you have instant bedrooms for employees who double as added security at night.

You can install windows and doors, electricity for the spoiled that can’t do without, air conditioning for the occasional too hot day and internet cable when you need to be in touch.

Add a porch to your containerized kitchen and your business takes on an upscale look.

The system works to keep officials happy because it not permanent and if your business must close or move, sell the container or pick it up and move it with you.